Most of the activity in the ATLAS group during the past few months has been refining the software that will allow the ATLAS telescopes to observe all night with no human intervention. This includes checking that the weather is safe for opening the dome, deciding where the telescope should be pointed for each 30-second exposure, collecting the photons from three cameras, searching the images for moving objects, and sending asteroid detections to the Minor Planet Center.

We are currently using data from the Haleakala telescope. We expect to have the Mauna Loa telescope mounted and operational in early 2016.

ATLAS has discovered its first near-Earth object (NEO). The new asteroid has received the designation 2015 PE312 from the Minor Planet Center (MPC). Its brightness indicates that it is probably 200-500 feet (60-150 meters) in diameter.

For more details, including an image,  see our December 4, 2015 blog page.

We have moved our main data-handling computers and their associated disk stoage units out of the Institute for Astronomy building to the newly-built Information and Technology Services (ITS) building on the main University of Hawaii Manoa Campus. In this building we are more insulated against power outages and A/C failures than at the Institute for Astronomy.  We do not need to go to the ITS building regularly, but we have 24/7 access to the computers in case there is ever a hardware problem such as a failed disk or motherboard. All the data from the observatories at Haleakala and Mauna Loa now go directly to the ITS building. 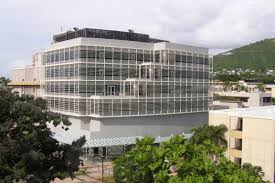 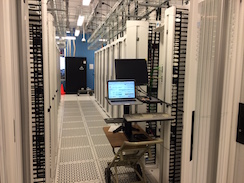 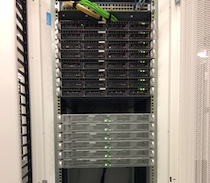 The new ITS building on the Manoa campus (left), the interior room where our computers are stored (center) and the single electronics rack holding all the ATLAS computers (right). Our 3-foot-high rack contains 264 CPU cores, about 1TB of RAM and about 200TB of redundant storage. The latter should be enough for about two years of ATLAS operations.

Images from all the cameras are flattened and calibrated in real-time at each summit and both the raw observations and reduced images are immediately downloaded to Manoa. Image subtraction and asteroid processing happens in Manoa.  The total volume of raw data downloaded from the two summits to Manoa is about 500GB per night. In a typical night we will obtain measurements for about 100,000,000 stars and 10,000 asteroids.