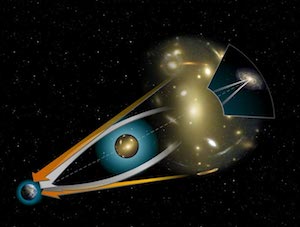 The massive galaxy in the center of the illustration
(the one highlighted by the blue glow) acts as a
gravitational lens for the more distant cluster of
galaxies on the right.

Just as a glass optical lens can bend and focus light, the gravity due to a planet, a star or even a galaxy also bends and focuses light. "Gravitational Lensing" exists as micro, weak, and strong. The ATLAS system will be sensitive to micro and strong lensing.

Micro-lensing occurs when the "lens," a small or faint object, passes directly between us and a more distant bigger or brighter object, the "source" (see illustration left). The last sentence is deliberately vague because the lens could be anything that has gravity and the source may be anything that emits light - and that covers a range of beasts in the universe. Typically, the lens is a big planet or a small brown dwarf star. Both planets and brown dwarfs are dark relative to stars. The source is typically a bright and more distant star. When we see the lens line up with the source, the lens' gravity focuses light from the source on Earth and causes the apparent brightness of the source to increase by much as100x. The brightness increases gradually to a maximum and then decreases in a characteristic way that uniquely identifies the brightening as caused by a micro-lensing event. The lensing effect is not constant because everything in the universe is always moving relative to everything else and the precise alignment between the lens and source lasts only a short period of time.

To detect micro-lensing requires regular monitoring of the brightness of a lot of stars - a task at which ATLAS is highly efficient! There are about a billion stars in the sky bright enough to be detected by ATLAS, which means about half a billion are visible to ATLAS on any given night. Based on what we know about the frequency of lensing events from other surveys we estimate that ATLAS should detect about 30 micro-lensing events per year. About 10 will be very interesting because of their brightness and good time coverage.

Strong gravitational lensing occurs when the lens is an entire and massive galaxy. The galaxy lens, in turn, magnifies and distorts the light from more distant source galaxies far beyond the lensing galaxy. Since the lens increases the apparent brightness of the source we can use the gravitational lens to examine galaxies that are much further away than normally possible.

You might think that the probability of galaxies lining up so precisely for lensing to occur must be very small - and you are correct! But there are many, many galaxies in the universe so the probability of some galaxies lining up is good. In fact, we expect that somewhere on the sky there are about 40 AGN sources (see above) lined up with a massive gravitational lens. Of these 40 sources we estimate about seven will have magnifications of 10 or more! The strong lensing allows us to examine the behavior and properties of these very distant AGNs. At the highest magnifications there can be micro-lensing of the source by stars within the lensing galaxy that can cause 'flickering' of the distant AGN's light.