Asteroid impacts dramatic enough to notice are rare. Until the 18th century, European academics simply did not believe that stones could fall from the sky and skepticism persisted even into the 19th century. We now understand that impacts occur constantly. Most are very small: gravel- or baseball-sized rocks that burn up entering the atmosphere, leaving only their burnt dust to float down and increase the mass of the Earth by tens of thousands of tons every year. Since most of the Earth's surface is ocean or far from human habitation, most impacts are not observed. Weather and vegetation rapidly erase evidence of small impact craters and degrade or bury the meteorites. Scientists head to Greenland, Antarctica, Australia, and other deserts, which are exceptionally good places to find them.

There are, however, recognized impacts and we list some of them below ranging from events within the past few years, to large explosions that occurred in the past century, to huge explosions while humans were present on Earth, to global catastrophes eons ago. 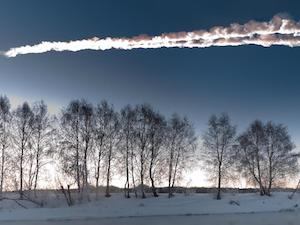 The meteor streaking through the sky above
Chelyabinsk, Russia on February 15, 2013.

On February 15, 2013. a 10,000-ton asteroid exploded 23 kilometers (14 miles) above the ground near the Russian city of Chelybinsk in the Ural Mountains sending a shock wave that damaged buildings and shattered windows. Debris rained across the city causing several small craters and punching a large hole in an ice slab covering a nearby lake. Flying glass injured hundreds of people on their way to work.

The event took the world by surprise. Had it arrived at Earth at a slightly different time or angle it could have hit Moscow, Belfast, Dublin or any number of other cities with latitude similar to that of Chelyabinsk.

The blast from the approx. 17-meter diameter space rock had an estimated energy of 460 kilotons of TNT – equivalent to about 30 atomic bombs of the kind dropped on Hiroshima during World War II. A study published in the June 9 Geophysical Research Letters by Pichon et al. reported the explosion produced a powerful shock wave that raced around the world twice and was detected by 20 worldwide monitoring stations designed to detect ultra-low frequency sound waves emanating from nuclear test explosions.

The Chelyabinsk event ranks as the largest impact recorded on Earth since the Tunguska fireball above Siberia in 1908 (see below) that released an estimated energy equivalent to 10 megatons of TNT and destroyed hundreds of square miles. 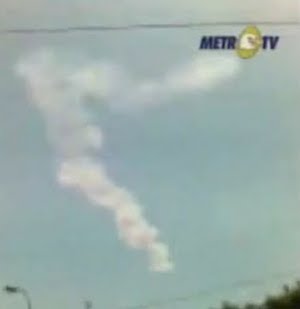 Remains of an asteroid explosion over Indonesia.

A large explosion occurred over Indonesia on October 8, 2009. The explosion is estimated to have released an energy equivalent to 20-50 ktons of TNT and the impacting asteroid was probably 5-10m (15-35 ft) in diameter. The event was not seen ahead of time because the moon was nearly full and because there is no survey that scans the entire sky all the time. No fragments were recovered and there were no reports of blast damage, possibly because the explosion occured over the ocean. 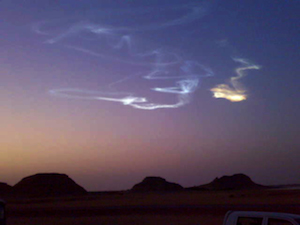 On October 7, 2008, for the first time an asteroid was discovered before it hit the Earth. This asteroid, 2008 TC3, was discovered by Richard Kowalski of the Catalina Sky Survey and the full story is at the JPL NEO website. The asteroid is estimated at about 2-3 meters (7-10 ft) diameter and the impact released about 1-2kton of energy over a barren area in Sudan.

It's an amazing story because of the hard work and quick wit of Kowalski and the Catalina Sky Survey, the way the Minor Planet Center coordinated hundredsof observations by amateurs and professionals over the next 20 hours, and the astounding accuracy with which scientists at JPL were able to predict the eventual impact. Within a few hours they knew where it would land within 100km and when it would land to within 20 seconds. Their final prediction was accurate to 1km and 1.5sec. A story in the New Scientist describes the expedition that recovered fragments of the meteorite.

That it occurred almost exactly one year before the Indonesian event described above means that the Earth was passing through the same position in space as when it was struck a year earlier. The timing coincidence may herald the beginning of a new annual meteor shower on October 8. In the hope of discovering more asteroids that might strike the Earth on the same day, astronomers tried looking back along the approach direction of 2008 TC3 but did not detect anything. ATLAS will be keeping an eye on that spot in the sky. 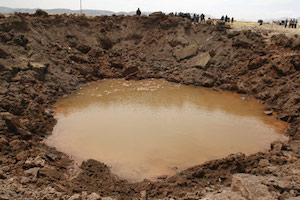 Crater that formed in the southern Peruvian town
of Carangas on September 16, 2007.

On September 15, 2007 an asteroid struck the Earth in Carancas, Peru, and left a 13-meter (40 ft) wide, 4.5m (15 ft) deep crater. The explosion shattered windows a kilometer (half mile) away. Details are found in this Wikipedia article as well as a National Geographic article that provided the image to the left (note the tiny people on the crater rim). An article in Astronomy Now describes the analysis carried out by Peter Schultz who describes the asteroid as a chondrite about 3 meters (10 ft) in size that probably burned up in the atmosphere. However, the hypersonic approach velocity created a self-sustaining shock, like a shaped explosive charge, that kept the material and energy directed towards the eventual impact site. This may be a small version of the Tunguska explosion 90 years earlier (see below). 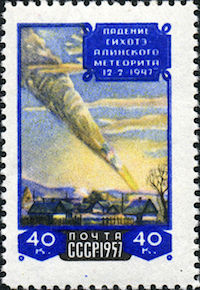 Stamp commemorating the 10th
anniversary of the Sikhote-Alin
meteorite shower.

On 12 Feb 1947, a large meteorite fall occured near the Sikhote-Alin Mountains near Vladivostok, Russia. It is thought to have been an iron meteorite that weighed about 100 tons (i.e. about 2.5m or 8 ft in diameter) that scattered many fragments and craters over a wide region. The illustration to the left shows a stamp to commemorate the 10th anniversary of the Sikhote-Alin meteorite shower which reproduces a painting by eye witness P. J. Medvedev. Although this asteroid was far smaller than the usual impactor that punches through the atmosphere, and therefore carried much less energy, its iron composition made it unusually effective for delivering its explosive power to the ground. Thus, although M-type asteroids that are mostly metal-iron are much less common than the stony C- and S-type asteroids their ability to cause damage is greater at any given size because they are stronger and more likely to deliver damaging material to the ground. 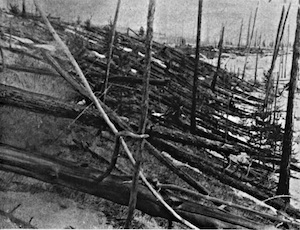 The Tunguska asteroid impact in 1908 knocked
down and burned trees over an area the size of
a large city.

On June 30,1908, a huge explosion occured in Siberia over Tunguska. Nineteen years later, in 1927, Leonid Kulik mounted an expedition to the site and found dramatic devastation. Trees were scorched and denuded of branches over a "ground zero" region 8km (5 miles) in diameter, and trees were blown down pointing away from the epicenter over a vast region of 70x55km (45x35 miles). Thought to be a stony asteroid 50 meters (160 ft) in size, the explosion released about 10 Mton of energy. People were knocked off their feet at distances of 60km (35 miles) from the impact.

Scientists at Cosmic Materials Space Research have used eyewitness accounts to try to reproduce the sounds of the Tunguska explosion.

The discrepancy between the devastation caused by the Tunguska explosion and the lack of recovered material or a crater is probably because the asteroid was completely consumed in the atmosphere but still created a huge shock wave that punched down to the ground. Detailed simulations by Boslough and Crawford support this conclusion and their work is summarized in an article by the Planetary Society. The result is that an asteroid that explodes high above the Earth's surface can produce more damage on the surface than a point explosion of equivalent energy on the ground. Asteroids smaller than about ~100 meters (330 ft) diameter are not expected to make it to the surface intact yet they can still cause great damage. 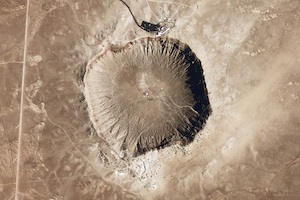 The Meteor Crater in Arizona was created by the impact of an asteroid about 50,000 years ago. This iron asteroid is thought to have been about 25-50m (80-160 ft) in size producing about 1.2km (0.8 mile) in diameter and 200m (650 ft) deep! The explosion was equivalent in energy to a few Mton of TNT, similar to the explosion in 1908 over Tunguska (see below). Planetary scientists think that such impacts occur every 1,000 years, and there may have been dozens of similar ones since the creation of the Meteor Crater. What makes the Barringer Meteor Crater exceptional is its preservation due to its desert location. Since the impact of this object 50,000 years ago, it is likely that some other impact took place that was ten times bigger - but no evidence remains. The Barringer Meteor Crater is a fascinating tourist attraction and well worth a visit. 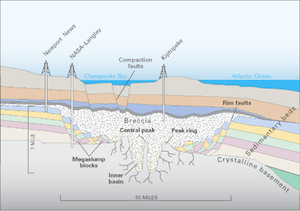 A substantial impact about 35 million years ago created the Chesapeake Bay and inundated the East Coast as far inland as the Blue Ridge Mountains. The impact crater measuring 40km (25 miles) across and the damage to the geological layers affects the aquifers in the area to this day.

The Popigai Crater in Siberia was probably created by a 5-8km (5 miles) diameter impactor and may have happened at the same time as Chesapeake Bay. The shock and heat from the impact transformed graphite into diamonds throughout the impact area. See the Wikipedia article for an interesting set of pointers to other topics on asteroid impact cratering on Earth. 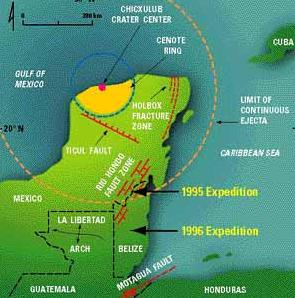 Fossil evidence shows a startling, abrupt change in life on Earth that occurred about 65 million years ago. Prior to the event in the Cretaceous period,dinosaurs were common, as well as many other species that no longer exist today. After the event, known as the Tertiary period, most animal and plant species on the planet suddenly disappeared.


This K-T fossil boundary (why isn't it 'CT' you ask? It's because the word Cretaceous starts with a 'k' in German) shows a layer of the element iridium, which is rare on the Earth's surface but much more common in asteroids. The layer also includes burnt material consistent with vast, widespread firestorms on the Earth's surface. Tsunami (tidal wave) deposits around the Caribbean also date from that time.

Most people believe that the cause of this change was the impact of a large asteroid at Chicxulub, off the coast of what is now Yucatan, Mexico (see map on left). The unmistakeable site of an ancient asteroid impact -- a 180km (100 miles) circular crater -- contains minerals that show the effects of high temperature and pressure, shock, and shattering.

The gravity map on the right shows concentric rings due to the impact and the white dots label places where sinkholes are found suggesting creation by subsidence of the crater wall.