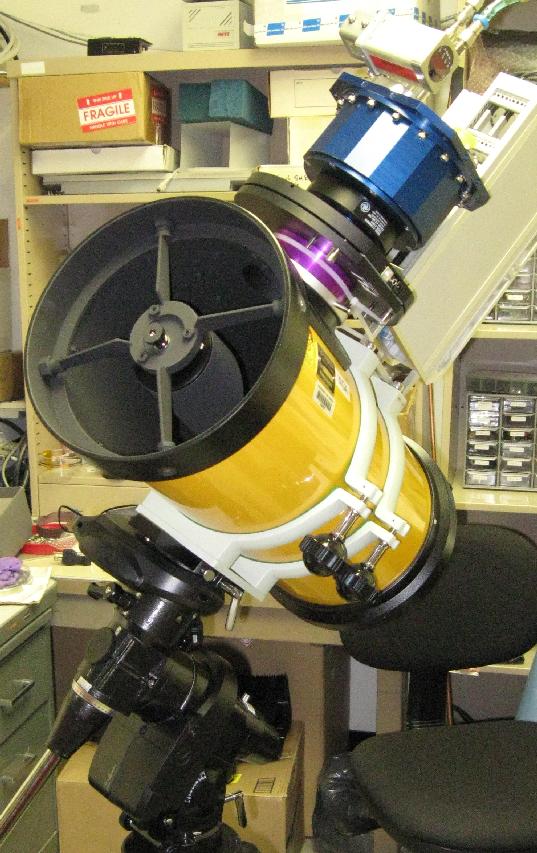 A prototype camera (16 Mpixel) mounted on an 18cm Takahashi astrograph.

We've been very, very busy now that we have money arriving in January from NASA to start building ATLAS. We've set up a web site to host project information and progress that we will soon install on a new ATLAS computer. We have written a design document that details all the steps we need to go through and how much time (and money) we think we'll need for design and construction. A dozen very tough-minded individuals have agreed to serve as our Science and Technical Advisory Committee (the STAC), and we've met with them and introduced them to the project. Most importantly, we've just issued some advertisements to hire one or two software engineers and a post-doc to work full time on ATLAS.

Getting ATLAS on the air is sort of like knocking over a bunch of dominoes, since so many of our decisions are dependent on earlier ones. The first decision will be what telescope to buy or build. While we think that a pair of four co-mounted Takahashi astrographs will work well, our optics designers, Mark Ackermann and Klaus Hodapp, have come up with markedly better telescope designs which we think will double the survey speed from 40,000 sq deg per night (twice the visible sky) to as much as 80,000 sq deg per night (four times), with enough sensitivity to see asteroids at 20th magnitude. These would be bigger telescopes (40-50cm) with wider field of view (7-9 deg) so we would only build two instead of eight. We expect early in January 2013 to have developed these designs to the point of being able to get quotes from manufacturers and we expect to make a final decision (with the STAC's help) by March.

Once we have decided on the telescope design we can decide on issues such as CCD and camera (16 Mpixel or 100 Mpixel?), telescope mount, enclosure, site, etc. Rob has analyzed many performance simulations that are telling us that ATLAS will be just as efficient with one site instead of two (the Earth's motion sweeps out a baseline for triangulation of successive images), so we may only need to deploy ATLAS at one location. We are actively looking at sites throughout the Hawaiian islands, with some very promising possibilities.

Lastly, we have a small prototype camera (16 Mpixel) that we can mount on an 18cm Takahashi astrograph (see the photo taken in our lab) that could get us on-sky early in 2013 (with much lower sensitivity, of course). We are strong believers in spiral software development so once we have engineers on the team we want to be able to challenge and inspire them with real data and real discoveries. Stay tuned...