We have been told by NASA's Near Earth Object Observations (NEOO) program that ATLAS is 'Selectable for Funding' after our proposal received very positive reviews from a panel of experts. Whether we receive any funding this year now depends on the NASA NEOO program's budget. In the mean time and as time permits we continue to seek other sources of funding and perform both modest software simulations and hardware development.

Our software simulations use a large and realistic set of synthetic (fake) asteroids including a population of 10,000 objects that were contrived to hit Earth in the next century. We simulate the ATLAS survey performance at identifying these objects before they hit Earth. The simulations indicate that we may do better by taking 4 images over a timespan of an hour or two than by using 2 images from 2 different sites. The spinning Earth orbiting the Sun carries the telescopes through space whether we like it or not, and that provides the baseline to triangulate the distance to an object (using parallax). If we change our strategy to use one site and a different observing cadence it would not be a big modification in how we planned to operate ATLAS; but it's an illustration of how a scientific project evolves and improves. 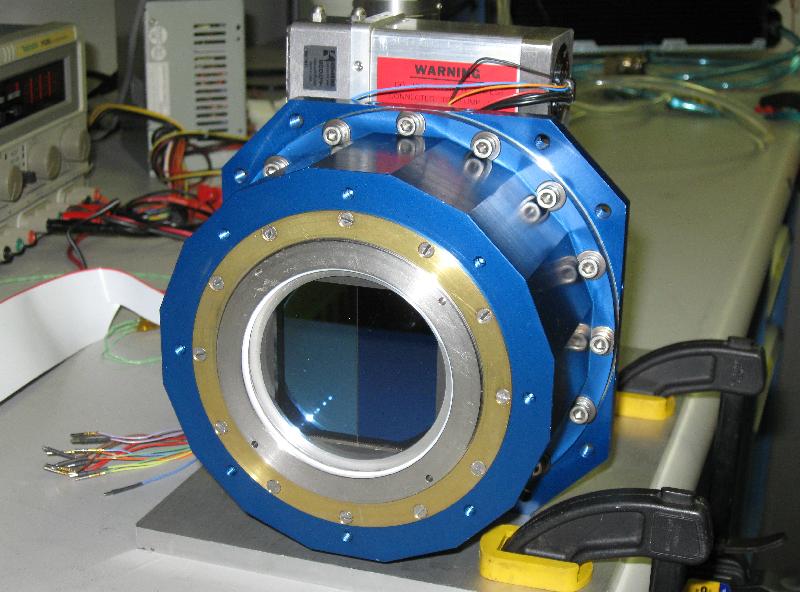 A prototype ATLAS camera showing the CCDs
mounted inside the dewar that keeps the CCDs
chilled and in a vacuum.

We are steadily using donated funds to build a prototype camera (right). This is a 4x4k detector that we will soon mount on a 180mm Takahashi astrograph and begin to survey the sky. This system will not be nearly as sensitive as the full-up ATLAS array but it will discover asteroids and provide realistic data that will jump-start our software development.

We are also evaluating a remarkable telescope design by Valery Terebizh that offers a 10 degree field of view with a 0.5m aperture - twice the aperture and view of the Takahashi astrographs that form the ATLAS baseline design. A pair of these telescopes with a 10x10k CCD would net us nearly three times the sky coverage compared to the eight Takahashi system - so stay tuned!

Check out our latest addition to the fallingstar.com site: Other Cool Science with ATLAS