With the domes on both islands nearing completion, the ATLAS team looks forward to installing ATLAS 1 and ATLAS 2 telescopes in early 2015. 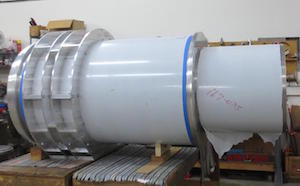 Construction of both ATLAS telescopes is almost complete. DFM Engineering, the manufacturer, is predicting delivery of Telescopes 1 and 2 in February and April 2015. The two primary mirrors have been polished, the field lenses are complete, the tube assemblies and shutters are ready, and the filter changers are nearing completion.

The telescope mounts are finished and are awaiting shipment from APM Telescopes in Germany.

The telescope tube assembly under
construction in August 2014

The ATLAS project has a contract with Semiconductor Technology Associates (STA) for two 10k x 10k STA 1600 CCDs and their electronics to be installed in cryostats built at the Institute for Astronomy. One of these (Acam 1) has been assembled and was shipped to STA in August 2014 where it was successfully fitted with an engineering-grade CCD. It appears to perform well. We expect delivery of the science grade chips in early 2015.

A plan for Acam 1 to be integrated into a telescope at DFM in Colorado to image Polaris from the parking lot in mid-December is under consideration. 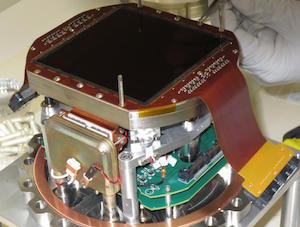 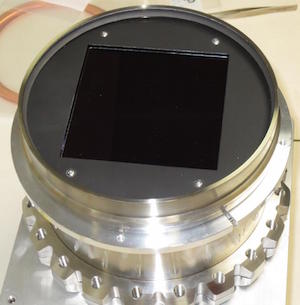 On the left is the engineering grade CCD device being installed in the Acam cryostat.

On the right is the closed cryostat,

Work continues on the renovation of the loft and the installation of the power and data systems. A meteorology station (Boltwood and all-sky camera) is being installed in the nearby meteorology building on Haleakala.

The NFIRE Ash dome on Haleakala

The original manufacturer, Ash Manufacturing Company, has upgraded the Mauna Loa dome. Plans continue for the removal of the existing loft and pier, the pouring of a new pier, and the replacement of the loft by the end of 2014.

It is not finally decided whether the Haleakala or Mauna Loa site will receive the first full-size ATLAS telescope. As of this update, the Haleakala site is tentatively favored for Telescope 1 first light in early 2015.

Software development is moving ahead. Since the July 2014 update there have been

By the end of 2014, the team expects to have near-robotic telescope operation and data collection using the Pathfinder telescope. The system will also include automatic detection of moving objects, calculation of asteroid orbits, and reporting to the Minor Planet Center (MPC) with only light human intervention.

Congratulations to our software guru Larry Denneau who has just been approved for a PhD in astrophysics from Queen's University, Belfast.

ATLAS post-doc Brian Stalder joined the project on August 1, 2014. The team hopes to hire a second post-doc in June 2015.

ATLAS continues to stay within its expected schedule and budget. By the end of 2015, we plan to have full robotic operation of both telescopes, including automatic reporting to the Minor Planet Center.