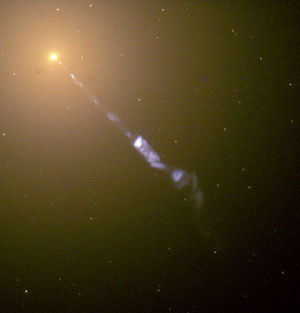 Hubble Space Telescope image of a 5,000 light-year
long jet being ejected from the active nucleus of the
galaxy M87.

Most astronomers today think that massive black holes exist at the center of every large galaxy. A black hole is a region in space where the mass is so great and the gravity so strong that even light cannot escape. A black hole with the mass of the Sun would have a diameter of only about 30km (about 20 miles)! That may not seem surprising until you consider that the diameter of the Sun is about 1,400,000 km (or about 1,000,000 miles). Imagine squeezing the mass of the Sun into a billionth of a billionth of its current volume. Or imagine squeezing the Earth into the head of a pin!

The supermassive black holes at the center of galaxies have the mass of a million to a billion of our Suns and diameters that are about the size of the Earth's orbit around our Sun. They became massive by gobbling up material that fell into them long ago. And by 'material' we mean entire stars - millions of them! They also consume the dust and gas from which stars are formed (and any leftover material from their formation). As the supermassive black hole assimilates material the objects heat up and emit energy that we can detect on Earth. When a supermassive black hole consumes a star it generates a specific signature in the type of emitted light and in how the light changes with time. Similarly, if the black hole is being fed by a disk of dust and gas that is swirling around it we can also tell what is happening.

Active Galactic Nuclei (AGN) are black holes at the center of massive galaxies that we see consuming material. By identifying AGNs and monitoring their brightness we learn a lot about the supermassive black holes and the environments in which they live at the center of galaxies. One thing we know is that there are more AGNs the further away we look in the universe. And looking further away is equivalent to looking back in time meaning that when the universe was much younger, there were more AGNs. The supermassive black holes are still at the centers of galaxies (there is one in our own Milky Way galaxy) but they are not necessarily active because they've already consumed all the available stars, gas and dust. Thus, finding and studying AGNs at different distances from Earth tells us how black holes and galaxies evolve over time.

ATLAS all-sky survey will monitor more than 100,000 AGNs nightly. Furthermore, because ATLAS is watching 40 million galaxies twice every night we are able to detect when a star falls into one of the central black holes. We estimate that ATLAS will witness a black hole consuming a star about 20 times each year.